Second book out in August

Confusingly, this will have different titles and covers in different countries, but apart from the spelling of words like colour, the interiors should be unchanged. Credit for the titles and cover designs should go entirely to each of the publishers.


Birds are intelligent, sociable creatures that exhibit a wide array of behaviors—from mobbing and mimicking to mating and joint nesting. Why do they behave as they do? Bringing to light the remarkable actions of birds through examples from species around the world, Understanding Bird Behavior presents engaging vignettes about the private lives of birds, all explained in an evolutionary context.

We discover how birds find food, relying on foraging techniques, tools, and thievery. We learn about the courtship rituals through which birds choose, compete for, woo, and win mates; the familial conflicts that crop up among parents, offspring, and siblings; and the stresses and strains of nesting, including territory defense, nepotism, and relationship sabotage. We see how birds respond to threats and danger—through such unique practices as murmurations, specific alarm calls, distraction displays, and antipredator nest design. We also read about how birds change certain behaviors—preening, migration, breeding, and huddling—based on climate. Richly illustrated, this book explores the increasing focus on how individual birds differ in personality and how big data and citizen scientists are helping to add to what we know about them.

Drawing on classic examples and the latest research, Understanding Bird Behavior offers a close-up look at the many ways birds conduct themselves in the wild.

Decided to record some of the lovely spring that is taking place in the northeastern US (mostly in Prospect Park and Park Slope). 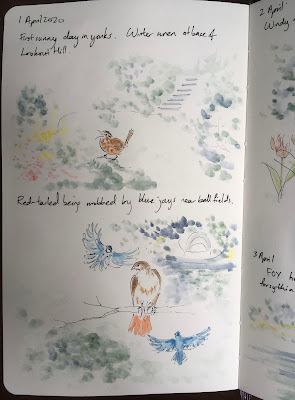 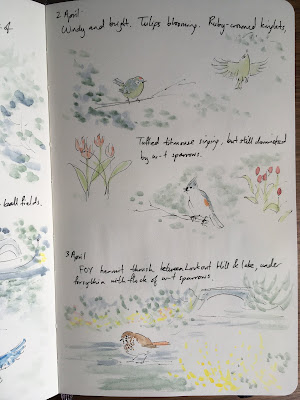 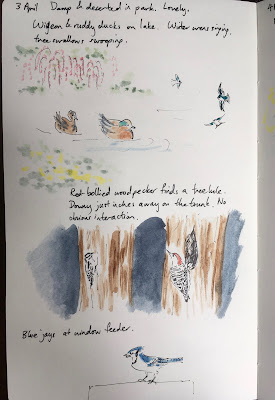 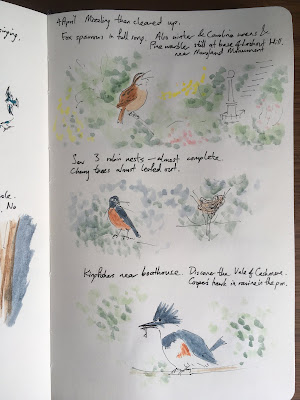 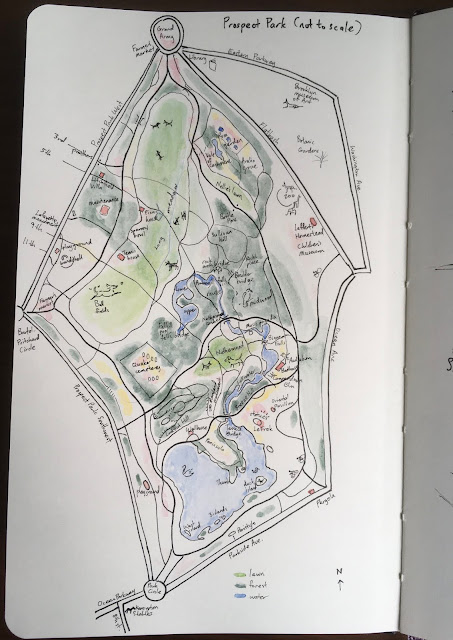 Read more »
Posted by darwin's jackal at 5:57 AM No comments: 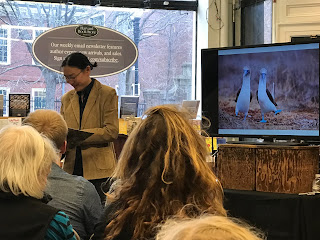 Fatbirder View:
What struck me most from this wonderful book is that nature, even within one family is extraordinary diverse. Mating, pairing and offspring rearing is as varied in the avian world as in the human realm, maybe even more so. The breadth of knowledge of the author is displayed on every page and is really well presented.
Its entirely admirable that someone should know as much as they do with a depth of scientific understanding yet be able to convey that to the lay reader, succinctly, accurately and readably.
I’m still reading and re-reading and have been charmed, captivated and entertained, but mostly greatly educated by this work.
It gets my highest recommendation.

by Corina Newsome Biologist, 12 March 2020
Wenfei Tong artfully narrates the complex world of avian reproduction in his newest work. Walking the reader through the many layers of bird family life, Tong describes the intricacies of mating systems and offspring-rearing strategies for bird species around the world, and the suite of social interactions that characterise them. Her use of analogies to the human social experience, such as infidelity and divorce, parental roles, and economic investments, allows us to personally relate to the reproductive decisions made by various species, while simultaneously celebrating the distinctness of avian life.
Understanding that birds have often been misinterpreted by the public as the epitome of romantic commitment, Tong gracefully guides us to the fact that bird mating systems are both more beautiful and more brutal than most people realise.
Bird Love will bring any reader to more deeply appreciate the hidden complexity of birds.

By Julie Zickefoose April 16, 2020 11 49 am ET
Brush up on your evolutionary biology and buckle up for Wenfei Tong’s “Bird Love” (Princeton, 192 pages, $29.95), a beautiful book about the world of avian breeding systems. Mountains and years of scientific research are gathered together here in a bare-bones recitation of all that is possible—and much that seems impossible—in bird reproduction. Pelicans lay two eggs but raise only one chick, standing impassively by as Cain and Abel fight it out. To escape predators, female hornbills seal themselves into a tree cavity for weeks, molting all their flight feathers, dependent entirely on their mates for sustenance. Attention is given to the behavioral outliers, with sex-role reversal, cooperative breeders and brood parasites commanding the most ink. Throughout, stunning photographs keep the pages turning. This is an information- dense book best made for dipping in and out.

The world’s birds have an extraordinary range of mating systems, and this gorgeous and expertly written book explains them all. Author Wenfei Tong covers courtship, nests and eggs, raising chicks, group breeding, and more. She considers why some species, such as the Wattled Jacana, rely on males to do all the childcare, while others, such as cuckoos and honeyguides, dump their eggs in the nests of others to raise. It’s a beautifully designed book on an endlessly fascinating topic.

Summary: An exquisitely-presented and informative look at the family life of birds. Highly recommended.


I was a little perturbed when I looked at the blurb for Bird Love on a couple of on-line booksellers: exploring the sex life of birds it said. I very nearly passed over the book, but a closer examination suggested that the book is about the family life of birds, which is rather different. If the book was confined to the sex life of birds, you would be missing an opportunity to understand how birds live day-to-day, bring up their families and cope in the wild. Not only that, you have missed the treat of so many beautiful illustrations about a wide variety of birds which run through this book from the first page to the last.
Superficially, it might seem that everything to do with birds is harmonious, without any suggestion of conflict but this is far from the truth. For example, if you are unlucky enough to be the second fledgeling in the nest you could find that your older brother or sister could be quite brutal as their aim is to survive rather than nurture. On the other hand, some species collaborate as a group to ensure that as many fledgelings as possible survive. There are even examples of role reversal where the male takes the dominant role in bringing up the chicks: nature discovered house husbands long before humans did so. How many of us knew that female albatrosses can have same-sex partnerships lasting twenty years?
This book is a timely reminder of the damage that humans can cause to the birds' environment. The decline and eradication of species is something which should all be aware of, and do our best to reverse. Wenfei Tong tells us that climate change has affected the migratory patterns of many birds. There are ten thousand species of birds, but the common cuckoo has declined by half in just twenty-five years. It could, of course, be argued that this is good news those birds which have been unwilling hosts in the past.
The coverage of Bird Love is extensive. It looks at ecology and mating systems, courtship, nests and eggs, raising chicks, sex-role reversals, group breeding and brood parasitism (think cuckoos on that one). Once you realise this, it becomes obvious that this is not a 'coffee-table book', as its appearance might suggest, but a serious look at the family life of birds. It is quite technical in places and you will need to work at it to get the most out of it, but I was surprised by how much information was delivered in an accessible fashion.
I found the book fascinating: it's the type of book which can intensely annoy other people because you're constantly telling them about what you're reading: Did you know that house sparrows and house finches use cigarette butts to keep their nests free of lice? I'd like to thank the publishers for giving me this opportunity.

Birds do it.
But if you’ve taken a basic biology course, you likely already knew that.
Dr. Wenfei Tong, however, knows much more about how they do it than just the basics, and in her new book Bird Love; the Family Life of Birds, she explores and explains the extraordinary range of courtship, mating, and brood rearing practices found among the planet’s diverse birdlife.
Covering the essentials of these behavioral categories, as well as delving into some of the more unusual – and frankly, surprising – practices, such as brood parasitism and reciprocal promiscuity, Dr. Tong’s book is clearly a work worthy of attention by ornithologists, birdwatchers, and general naturalists alike.

Posted by darwin's jackal at 8:26 AM No comments:

First book coming out in March 2020


Published by Ivy Press and Princeton University Press. To pre-order in the US, and in the UK. 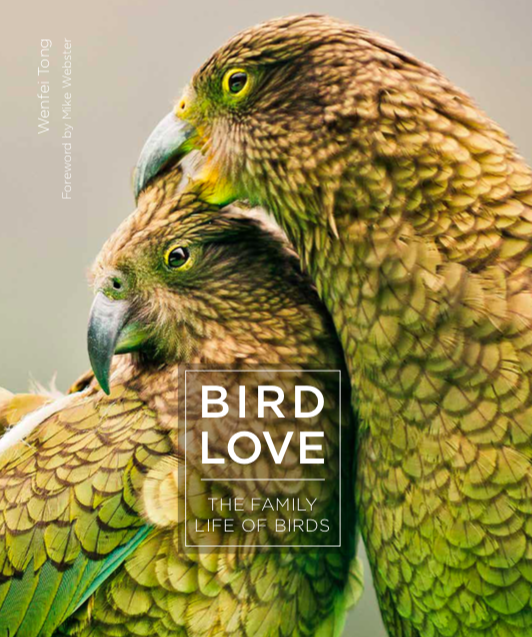 Posted by darwin's jackal at 7:20 PM No comments: